When Dawn and I travel, one of our favourite things to do is eat. As I have said in previous posts we like to find foods that are famous in that town or city.

Our favourite meal of the day is breakfast and if we find places with a good breakfast then we are set for the day.

In Chicago Dawn had found a breakfast place called ‘Wildberry Pancakes and Cafe’ for the first day near to Millennium Park which was our destination for the day.

We wanted to try the tiramisu pancakes that they were serving there. As my main I chose a breakfast burrito with hash as my main dish and we ordered the pancakes as a sharing dish. 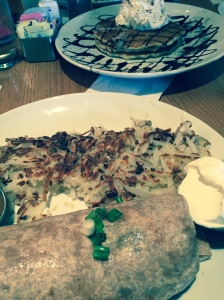 Whilst we do often find independent places to eat we do like to try places that are in lots of cities. As we live in England they tend to be the restaurants that are only in the USA.

Our favourite restaurant to try is Bubba Gumps. Now I know that lots of people don’t like to go to chain restaurants whilst traveling but to those of us who live outside the USA these restaurants are unique.

A Dixie fishwich and Lt Dan Pomegranate punch was my choice of the day.

We also tried the Cheesecake Factory and must be the only people who went there and didn’t eat cheesecake, too full after the very nice mac and cheeseburger

Dawn is a fan of the show ‘Man v Food’ and wanted to try Lucky’s Sandwich shop whilst we were in Chicago. We jumped on the train up to Wrigleyville and after a wander around the stadium and missing the shop by walking past (twice). We were seated and had drinks ready to tuck in. On looking around and observing the size of the sandwiches we decided one to share would be the best idea. So 1 roast beef sandwich it was complete with fries and coleslaw. 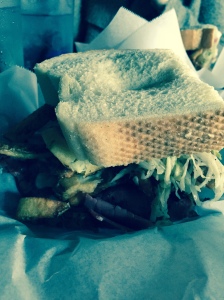 As we only shared the sandwich at lunch we decided that truffle fries were next on the menu at Timothy O’Tooles pub. It was a busy night as the Black Hawks were playing a Stanley Cup game that evening but we were determined so a beer was acquired and we waited for a table. The food and in particular the afore mentioned truffle fries were well worth the wait. 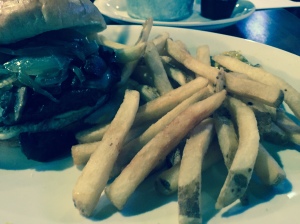 When you eat out in a city are chains your food of choice or do you like independents?

I think given the choice we like to try both 😁